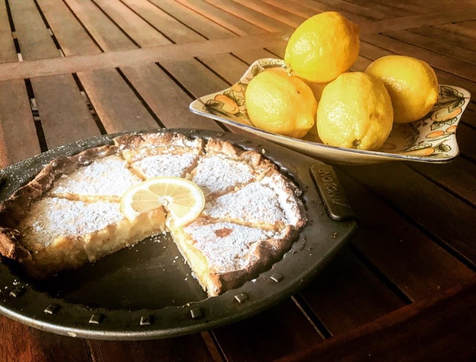 One of the scenes that I get the most feedback about from people who have read my second novel, BEAUTIFUL MESSY LOVE, is the one where Toby feeds his dying wife, Jen, the lemon pie that he makes from scratch.

The recipe I used in the book is the same lemon pie I bake for my family and it’s our absolute favourite family dessert. In the story, Toby bakes it exactly the way the recipe is written by celebrity chef, Marco Pierre White, in his cookbook HELL’S KITCHEN. It’s the same lemon tart that’s served at Harvey’s, a Michelin starred London restaurant.

But the way I bake it is with a few “mum” short cuts i.e. I use a blender rather than knead by hand and I use vanilla extract rather than scrape a vanilla pod because ain’t nobody got time for that!

So here is my version of Marco’s (and Toby’s) recipe. I hope you love this lemon pie as much as my family do!

1. Sift the flour and icing sugar and blend (on pulse mode of an electric mixer) with the butter until all the butter is worked in.

2. Add the egg, lemon zest and vanilla and mix until it’s a smooth dough.

3. Wrap the dough in cling film in a disc shape and leave it to harden in the fridge for half an hour.

4. Preheat the oven to 180 degrees Celsius

5. Grease a pie tin with a removable base that’s about 20 cm in diameter. I cut baking paper for the bottom too just to ensure no sticking.

6. Roll out the pastry to a disc large enough to cover the pie tin and go up the sides as well. (I do this with cornflour sprinkled on the bench so that it doesn’t stick.)

7. Lay the pastry gently into the tin and trim overhanging edges with kitchen scissors.

8. Top the pastry with baking paper and weigh it down with baking weights or uncooked rice or lentils.

9. Bake for 10 minutes then remove the weights and cook for a further 5 minutes uncovered.

10. While the pastry in baking, make the lemon filling by whisking the eggs and caster sugar and lemon zest in a large bowl until smooth. I use my free standing whisk for this.

11. Stir in the lemon juice then add the cream. Continue to whisk until everything is combined then skim any froth from the top with a large spoon.

12. Once the pastry is out of the oven, reduce the oven temperature to 120 degrees Celsius.

13. Pour the filling on top of the pastry and bake for anywhere between 30 minutes to 45 minutes, until the filling isn’t liquid anymore and has just set. Don’t let it brown though.

14. Let the pie cool for about an hour in the tin before you remove it. (I also put it in the fridge for an hour after this to help it set even more).

15. Sprinkle with more icing sugar and a slice of lemon to decorate.