google-site-verification=kIF-IL6zTvnTJbuytERavfWkLt61WDsmAcBmS7BY37I
TESS WOODS
Here I am being interviewed by Better Reading after the release of each of my books (or what I refer to as  my own personal portfolio of evidence of my ageing and weight gain weight with the passing years!)
​

​Here’s lots more about me:

I’m Egyptian  born, I migrated to Australia as a school child and I lost my Arabic surname when I married an Englishman. Our engagement party could easily have been a scene in My Big Fat Greek Wedding.  I wrote a piece for SBS Australia about my Arab-Egyptian upbringing that you can read here.

​My other big passion apart from writing is social justice. I started a group called Meals by Mums. We cook nutritious homemade meals for Perth's homeless people. We get together in our school canteen and spend a day cooking every term. Our meals are individually sealed and frozen and delivered to a drop-in centre where people who are hungry can drop in at any time and defrost one of our yummy meals.
​I'm also an ambassador for the charity group "Share the Dignity". This organisation aims to return dignity to Australian women in need by providing them with access to sanitary products. I led the committee for The West Coast Fiction Festival, an event that brought hundreds of readers and writers together to raise money for Share the Dignity. The festival led to free pad and tampon vending machines being installed in public high schools in low socio-economic suburbs in Perth.
I love languages. I speak and  read French and I can get by in Italian and Arabic.

I'm obsessed with the British Royal Family. OBSESSED I tell you!! I especially love Princess Kate. I wish we were neighbours and we could have tea and talk about royally things. I tried to write the royals into Love at First Flight. The folks at HarperCollins cut them out. I tried again in Beautiful Messy Love and the HarperCollins editors once again nixed it. My husband had to stop me buying a "Sparkle like Markle" T-shirt last time we were in the U.K. So instead I wrote Meghan and Harry's wedding into Love and Other Battles. And it stayed in there! I think my editors finally gave up trying to talk sense to me about not randomly adding royals to my books :)

Parallel parking also terrifies me. Not as much as the monkeys.

I was the class clown as a kid and now, as an adult, I’m the school-mum clown. Everyone thought my books would be funny. My books make you cry, not laugh. Go figure.

​Here are a few of my favourite things. Do we have things in common?

Books: Everything Maeve Binchy ever wrote (especially Evening Class)  but my all time favourite book is The Bridges of Madison County By Robert James Waller. Other books that have stuck with me over the years are The Thorn Birds, Big Stone Gap, On the Jellicoe Road, The Help,  Snow Falling on Cedars, Miss You, The Shell Seekers, Tully, The Horse Whisperer, Rachel's Holiday, and The Guernsey Literary and Potato Peel Pie Society.  Growing up I was addicted to the Sweet Valley High books. You can find more of my favourites here

Magazine: WHO magazine. I LOVE this mag and have been a subscriber since before I was married in 1995! It's hard to put into words how excited I was when I flipped open a page with royals on the cover (ROYALS!!!) to see that my publishing team had surprised me with a full page spread.  And then the following week  after the big surprise spread, I made the WHO'S Hot 12 list with PRINCESS freaking DIANA! Two years later, I was back in WHO with a five star review! 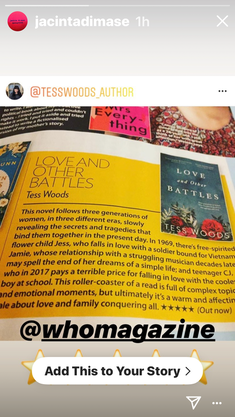 ​Quote: ‘You’re my own personal brand of heroin.’ Edward to Bella in Twilight.  (Stop judging - you know you secretly loved Twilight too!)

Song: Pretty much every Christmas carol! From about September. Played loudly for the neighbours.

Band: The Police. When Sting had hair he once flicked it around while he was on stage and his sweat landed on me in the audience. I haven't washed my face since that day thirty years ago. It's best to air kiss me for sanitary reasons.
​
Movies: Dirty Dancing,  The Notebook, Jerry Maguire, Under the Tuscan Sun, Bridget Jones, Music and Lyrics, Notting Hill,  My Big Fat Greek Wedding, Love Actually. If you're one of those miserable people who moan that Love Actually is awful and that when he holds up the signs and pretends to be carol singers that that's actually stalking,  and that there's no way you could fall in love with someone who doesn't speak your language even if they jump in a freezing eel-ridden lake to save your manuscript pages,  please just go away.  I mean it.

TV show: Friends. I've watched all ten series at least ten times, maybe more. I'm in an "Unagi" group chat where we do nothing but relive Ross's greatest moments over and over again. For me, it's Mona and the holiday card. "To sum up, you look young, we're having fun."

Place: Venice. I have thrown tantrums to rival any two-year-old whenever I've had to leave. On our next trip to Venice, my husband reckons he's packing sedatives to slip me for the vaporetto ride back to the airport.

Food: Potatoes. Made any way. Just hand over the potatoes and I'll love you forever.